I recently had the opportunity to appear on the Red Table Talk to discuss psychedelics, plant medicines, and people of color. I wish I had had the opportunity to talk about my dear friend, Jonathan Flores, a remarkable healer I recently visited in Ecuador. He uses Western medicine and traditional Amazonian practices to bring about emotional and psychological healing in his patients, including psychedelic plant medicines. The journey he took to become a healer is fascinating, bridging two worlds across eras, continents, and non-ordinary states of consciousness. I am honored to share his story.

When I was a small child, my parents asked me what I wanted to be when I grew up. “

A shaman – the kind that heals with plants,” I eagerly replied. You can only imagine the response I received from my parents!

“If you want to cure, rather than be a charlatan, you must become a medical doctor,” they said.

Although I would eventually take their advice, I embarked on a different and less-than-linear path. I am both a licensed medical doctor and a Yachak (the indigenous word for visionary or shaman) of Aguacolla (Huachuma Cactus) and a Curandero of Yagé (Ayahuasca). My training as a physician and my training as a Yachak would be intertwined, as they are today.

I grew up in the city of Guayaquil, Ecuador. Ever since I was small, I could feel a great sensitivity toward the world around me – its subtleties, intuitions, and energies. I grew up watching my grandmother clean the house with saumos, talking to the plants, and preparing natural medicines. I was a shy, introverted, extremely sensitive, and perceptive child.

My mother and grandmother were women of faith and knowledgeable about the spiritual world. Sometimes, quietly, they asked me for help to assist friends and relatives who suffered from ailments simply by laying my hands on them.

Although I come from a lineage of Colombian healers, my upbringing in Ecuador took place in a city where the influence of Catholic colonialism was strong. Syncretic faiths abounded, as they were the only way ancestral knowledge could be retained, but often at the expense of being diminished or camouflaged.

For instance, even though I grew up in an intellectual, middle-class home, with mixed ancestry, images of the Virgin, masses, women healers who purified with tobacco, “X-rays with Cuy,” and many other practices common within Latin American families existed side by side. Though traditional healing practices were part and parcel of my life, I also grew up looking “Northward,” like most people on my continent, under the shadow of Western culture. The unattainable chimera of the “American dream” was mass consumption and biomedicine as the only real option for wholeness.

When I was seventeen, I met my first spiritual teacher, a Buddhist nun who came from Tibet to Ecuador to share the teachings of a new and revolutionary technique called Reiki. It could be said that, at this moment, my inner search began. For several years I navigated through Hinduism and got into meditation (I was a yogi, a vegetarian, and followed the teachings of the Buddha), then I went to Taoism with my Chinese teacher and doctor.

Through Kung Fu, he taught me about discipline, humility, and honesty. I practiced the sacred art of Kung Fu and Taoist meditation for nine uninterrupted years. And, although I felt the blessing of Tao in my life, I continued searching incessantly for the ancestral path native to my land.

It was there that I decided to stop running in circles, searching for my spiritual path. I would accept the recommendation that had been made to me many years ago by my parents. “If you want to heal, be a doctor.”

Still, from the first day of medical school, I could see that biomedicine was a tangled endeavor, ostensibly striving to heal but often only exacerbating illness by ignoring the true sources of wellbeing. Coincidentally, it was also on my first day of med school, 18 years ago, that I was invited to my first Ancestral Medicine ceremony by a friend who told me, “I know some people who talk about what you are talking about, about spirit and energy. You should join their next event.”

Over the next few years, I attended all kinds of ceremonies of Ayahuasca, Huachuma, Peyote, Datura, Temazcales, Vision Quest, Sun Dance Ceremony, and Water Dance Ceremony. I performed the Natemamo, an intense purifying diet. I lived with indigenous people in the Ecuadorian and Colombian Amazon. I traveled to the Andes mountains and lived with the Saraguro, who showed me the sacred valleys where the Huachuma cactus grows free.

For five years, I learned and perfected my own Huachuma recipe with an elder. Arguably, I started an enthusiastic and unbridled career to make up for all the time that I felt I had lost. Magic opened before me, and I was fascinated. While this awakening of my cultural roots was growing, I was discovering with wonder the union of ancestral knowledge between all cultures: I recognized the teachings of the Tao and Hinduism and that of Buddhism. Remarkably, I was able to decipher many of the teachings that my grandmother had been imparting to me, indeed sowing into my very being from a young age. 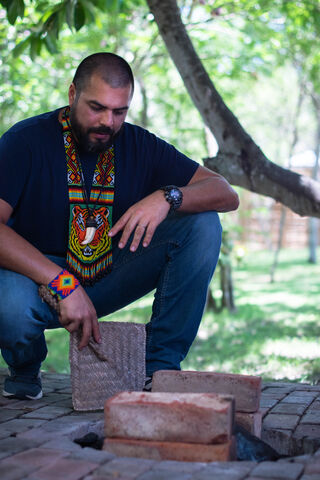 Everywhere I went, I tried to convince people about the powerful healing tools I had been exposed to. I wanted everyone I loved to feel the freedom and peace that I was feeling. But, alas, my attempts did not produce the result I expected.

On the contrary, friends and relatives began to treat me as if I was crazy, and a few worried that I was on drugs.

Throughout this time, I was attending medical school. I listened to my professors speak in a technical, detached, and categorical language. I saw life go by between labels, names, and nomenclatures. I was taught to see each part of the body as separate from the general system and treated as an isolated entity. I read books that told me the how, where, and when of each disease as if each human being were a generic machine.

Nobody talked about the emotions, spirit, or the importance of relationships, and love. And no one seemed to think any of this was problematic. I was unsure what to do, but I felt increasingly called to do something.

Although great wisdom was flowing into my life, I knew, somehow, something was missing. I was still only dabbling in shamanism. Like the person who goes from here to there, learning and storing information, yes, I knew more, but I was not wiser.

One day, in a ceremony, I received an insight from the plant medicine. It showed me that to advance and continue growing. I had to really practice the teachings in my day-to-day life. It was not enough to know something intellectually: that alone does not make us wise. True knowledge comes from experience. Wisdom is not dead words on a page. It is alive. And just as any living being, it must be fed, nurtured, and strengthened so that it does not become sick and die in this environment that is often so hostile.

But even though I understood all of this, a youthful rebelliousness was still operating within me. I was 24 years old and, although I did not fully realize it, I was in the middle of an inner battle to find the truth. The universe then sent me the most important teacher of my life: my first daughter, Alejandra, who came to this land without asking permission, as with the most magical and powerful things.

Dr. Flores lives in Ecuador with his wife and family and conducts individual, and group plant medicine therapy retreats at Nina Wasi.