Alexander and Shayoon Mendeluk are entrepreneurs, creators and LightForce Healers who help empower thousands of people around the world heal themselves from supressed trauma, disease, pain and emotional suffering, and also help them to align with their true purpose.

Together, the couple have established The LightForce Center. Based in Ibiza, The LightForce Center is a healing centre that helps individuals from all walks of life heal themselves from physical, mental and spiritual suffering. So far, their students have reported some impressive results, from healing chronic anxiety, stress, depression, pain, tumours, cancers, auto-immune diseases, asthma, eczema and more. Their joint and individual works have been featured in Vogue, Entrepeneur, Success, Grazia, LA Weekly and ABC’s Shark Tank, to name a few.

Alexander was the first to embark on a journey into the world of healing. Growing up in Malibu, Alexander was introduced to the world of energy through martial arts when he was a young boy. His brother is a martial artist, so he would teach Alexander things like qigong, energy work, the discipline of the mind and the body. “I have always been obsessed with the power that we have to manifest, visualization, and was always into self-education and all those things as I got older,” Alexander shares. “It was something that I have always loved and am fascinated with. I never thought that it was going to become the forefront until I met Shayoon, and we began to go on this awakening journey together.”

Alexander has lived a varied life, which each transition leading him to the next. First, he starred in the movie Twillight which led him to pursue acting. But before long, he established his first successful company, SpiritHoods, a unique apparel line which donated a percentage of its earnings to various non-profit groups that help endangered animals, the environment and children with cancer. He then sold the company and moved on to working in transformative healing, something that he felt he was called to do.

Shayoon, meanwhile, was born in Kenya and has family roots in India and Pakistan. She has lived all over the world, from Africa to Saudi Arabia to England, before her family settled in the U.S. She grew up in Oklahoma from age 9 to 18, and decided to move to Los Angeles on her own after high school. Shayoon went to school to study fashion, business marketing and management. She then found work in the fashion industry, and became a business owner at 23. Shayoon first met Alexander at Coachella in 2010. After a few encounters, a serious relationship blossomed between the two. 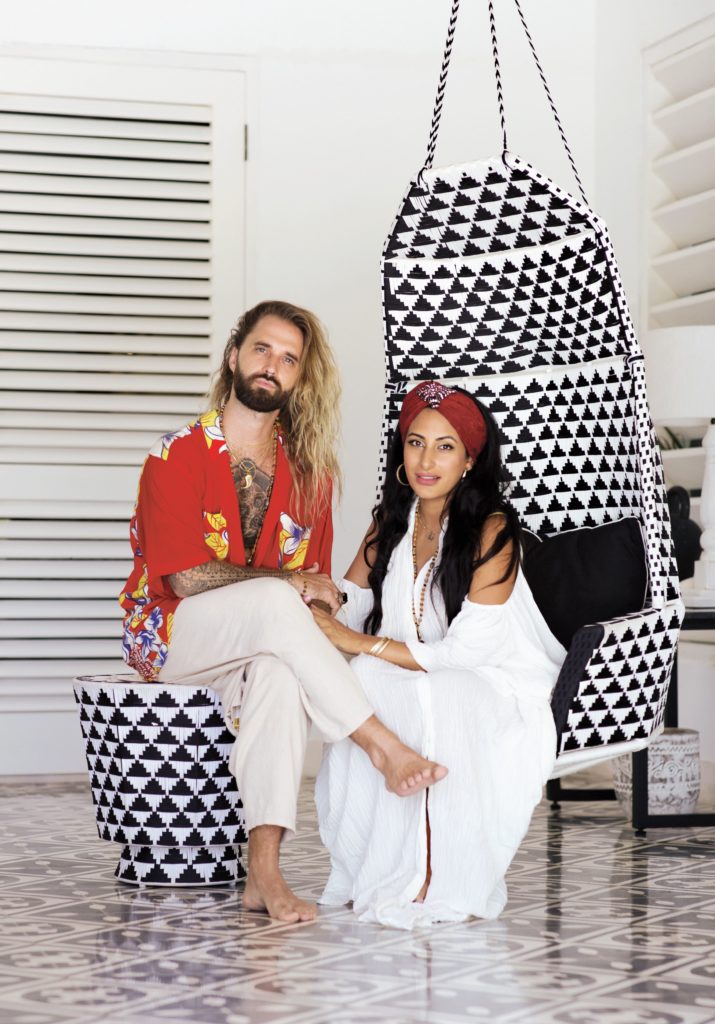 For Shayoon, however, the journey into the world of healing was markedly different. “I was in a terrible car accident when I was younger. Because of the repercussions of that, I was told that I wasn’t going to be able to walk properly again; that I wasn’t going to be able to have children. And I had to have all of these injections that put a lot of dampers on me. But in reality, what I needed to do was heal. I had no idea what healing was back then. Until I met my husband.

“When I met him, I was in a lot of pain. I couldn’t really do much,” Shayoon recalls. “I remember we were at a fashion exhibition in Las Vegas. Alexander was having a huge show there. I said that night that I didn’t feel good and that my back hurt; I just wanted to stay at home. He offered to try on me this healing modality called EFT or Emotional Freedom Technique. It changed my whole life. I was able to heal within five minutes, which was really crazy.”

After Alexander introduced her to healing, Shayoon learned the concept of forgiving her body and freeing herself of the emotional attachment to pain and suffering. She then became obsessed with the idea that we can heal ourselves by just forgiving our bodies. “So, I did everything in my power to want everyone to want to experience what forgiveness of your body looks like, and how you can further develop yourself in the healing space without having to use western medicine,” Shayoon expresses. “Don’t get me wrong, there’s the time and place for Western medicine. But true healing really comes from within. When you let go, and when you reveal what’s going on with you, you can heal pretty much everything.”

Following her first spiritual awakening, Shayoon’s natural gifts as a healer began to emerge and she was quickly able to see the energy of living things. She then tapped into the power energy healing. Over the years, she developed her powerful gift by training in multiple healing modalities including Reiki and Prana.

“I can see in colour, which in turn allows me to feel as well see what is wrong – colour-wise – with somebody,” Shayoon elaborates. “I use it to help people. For instance, if I see brown on somebody’s hand, I know there’s something wrong that can be healed. When it turns to gold, that usually means that it’s healed or it’s healing. So, I use my ability to enhance people’s current state into a better state.”

“True healing really comes from within. When you let go, and when you reveal what’s going on with you, you can heal pretty much everything”

Moving on to their healing modality, The LightForce Center, Shayoon shares: “The concept behind The LightForce Center came to me about five or six years ago in Los Angeles, before we moved to Ibiza. I was having these recurring dreams that I wanted to build a centre of light on an island somewhere.” After exploring different places, they decided to settle in Ibiza because both of them felt a magnetic connection to the Spanish island and were severely drawn to its energy.

“The basis of all healing on The LightForce Healing and why it works so well, is clearing negative emotional programming. It’s what Western medicine calls psychosomatic illness – illnesses with a psychological origin. In fact, our illness is manifested, for the most part, from our thoughts, our supressed emotions; and we hold those emotions in the body. Those negative emotions create chemical responses in the body and therefore physical responses, and then energetic responses that break down the function of the system. That’s when you get dis-ease or disease,” Alexander explains.

“You learn how to remove that by, identifying where the emotions are being held in the body and a series of connections with your heart, which allows you to open up your energetic centre. When you learn to then release that emotion through visualization and breathing, every single person has the ability to heal themselves in this way,” he emphasizes.

Shayoon and Alexander have been in Bali for a year and a half now. Alexander says that they actually came to the Island of the Gods for holiday, but then the global pandemic happened and they can’t go back to Ibiza. Since the pandemic, they carried out their work online. “When the pandemic happened, we obviously had to adapt and develop how to work remotely. Shayoon and I have different tools to teach people how to heal themselves on their own with techniques that we’ve learned remotely,” Alexanders notes.

“Now we’ve created the foundation. We have our own program, our own community, and now we are creating a physical space which is a place for anyone to come from around the world and heal what they are going through,” tells Shayoon. “Our inspiration comes from our deep connection with our Egyptian lineages as well as everything that we have developed together to create the space and this pyramid of life, basically.”

Alexander adds: “So, The LightForce Center is not just a physical location, but it is a metaphor for the centre of light that we have inside us. And that’s the key of healing.” 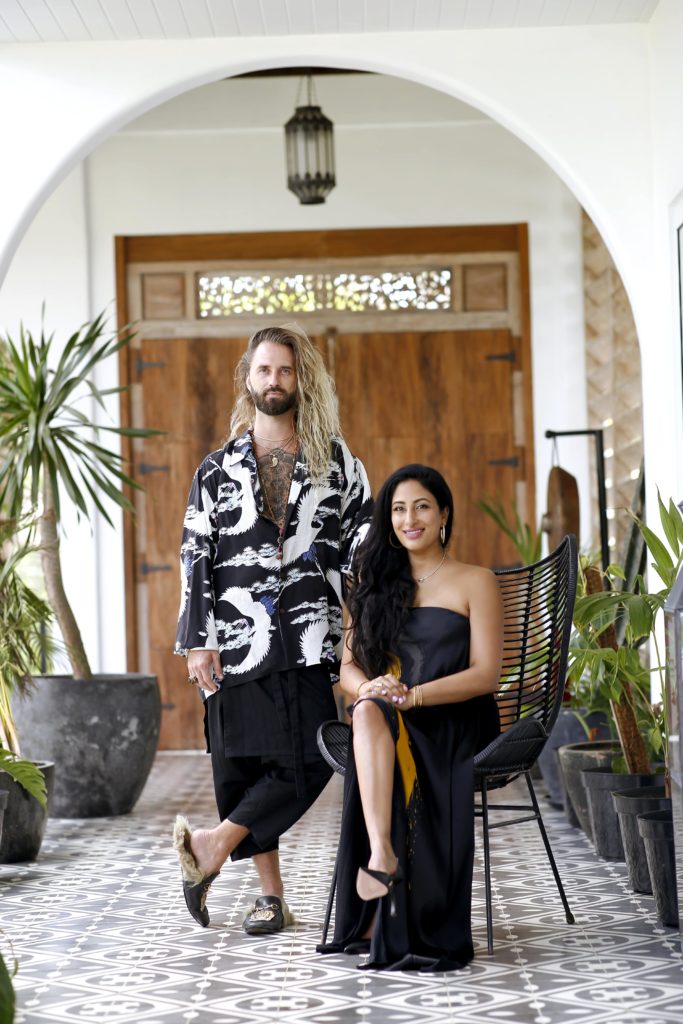 A journey of healing is definitely not an easy and smooth path to go through. As healers, what are the challenges that Alexander and Shayoon have faced while helping people? “I’ll say the biggest challenge that I see is for an individual to get to the place where they actually commit and say ‘yes’ to everything, and have their own inner belief that healing is possible for them,” Alexander answers. “To get a person into that state of belief is 99 percent of their journey. The healing is actually the easy part. Because healing is a natural state of being. Regeneration is in our DNA, right? That’s why when you cut yourself, it heals naturally. The same thing goes for your emotional and physical issues.”

It has always been their message that the true healing comes from within. As it says on The LightForce Center website: “The true healer is you! Your solution was never outside of yourself to begin with.” On that, Alexander elaborates: “We have all been programmed to believe that the answer is outside of us. It’s in the guru, in the teacher, or doctor, medical procedure, it’s in this new holistic thing, etc. Whether it’s alternative or Western, it’s the same thing. We are seeking something out there that can help us to heal. When you shift that belief into understanding that all the answers are inside of yourself, you reclaim your power. And in doing so, you recognize that you are your own healer, and that healing is not reserved to somebody outside of yourself to do that for you.”

Shayoon continues: “We were all, from a young age, programmed to become a certain way or to be a certain person. It’s ingrained in us to be something that we should be versus what we want to be. So, the ‘true healer comes from yourself’ is when you shed all of that, and you truly come back to your core and your main source – who you are and what you want versus who you should be, is what we encourage people to see. We say that we’re just the facilitators, you are the healer. Because you are the only one that can truly reprogram your own mind, body and spirit to recorrect itself.”

For those who want to start their healing journey, what would be the couple’s best piece of advice? “My advice is: start now. The time is now. Because there are so many things that you can do in life, and once you move through the pain, once you move through the suffering, you realise the purpose of what you are here for. And that is the most beautiful gift,” Shayoon exclaims.

“We offer a free Morning Ritual meditation, so I encourage people to come and try, and just start implementing it in your life. We always say, the results are going to give you that motivation. Once you take the first step, it continues to snowball and grow,” Alexander closes.